In How To Out-Recruit USC Part III, we fearlessly take on the taboo subject of race and USC when it comes to recruiting.

We have heard a number of times that the Trojan coaches portray USC as a leader in racial equality and breaking racial barriers.  Particularly when selling the program to the parents and grandparents of the recruits.

The thrust of their argument is based on the 1970 game between USC and Alabama. The gist is that USC, with some African-American players, beat an all-white Alabama team.

The University of Alabama was so horrified that a team with African-American players could beat them, that they immediately started integrating their team.  Therefore, we can thank USC for integrating Alabama, the SEC, and the rest of the southern college football teams.

While it certainly makes for a great story line, especially from a USC perspective, we completely debunk this revisionist history in our story,  BUSTING THE 1970 USC -ALABAMA GAME MYTHS.

So how does UCLA combat this?

USC is basically throwing out claims and forcing everyone to disprove them.  Most families of recruits automatically assume the information they are being given is accurate. The UCLA coaches cannot openly challenge it since it just looks petty and comes across as negative recruiting.  But what they can do is point the recruits and their families to information that is freely available on the Internet where the history of integration of both schools is covered.

For instance, let’s do a simple comparison: Surprisingly, (or not), we could find very little information

regarding USC and African-American football players before the mid-1950’s. There was a Trojan African-American offensive lineman in the 1920’s named Brice Taylor. Taylor was not only a starter in the first USC-Notre Dame game,  but was  remarkably USC’s first All-American.  You would think USC would trumpet Mr. Taylor, their VERY FIRST All-American player from here to eternity, wouldn’t you?

But they don’t. In fact, they didn’t even mention him in their football media guide until the 1950’s and didn’t induct him into the USC football hall of fame until 1995. 70 years after he played! After Mr. Taylor, there appeared to be quite a drought of African-American players on USC’s roster.

The next one we could find was about 30 years later in 1956 with C.R. Roberts. Roberts was an African-American Trojan fullback who had to go to UCLA to join clubs and a fraternity, since some USC clubs still discriminated based on race.

Unfortunately, many of today’s Trojan athletes are unaware of the struggles and accomplishments of  trailblazers like Jackie Robinson, a true pioneer of breaking racial barriers.  Ironically, these same football players are practicing on “Howard Jones Field” at USC.  In spite of Jone’s long career as head coach of USC, we could only find African-American players at the very beginning of his career (Brice Taylor, whom Jones inherited) and at the end, probably when he realized that UCLA was having great success with African-Americans (hmm, sounds a little like the change of heart at Alabama that the Trojans take credit for, doesn’t it?).

“The general talk at the time was that USC didn’t want (Jackie) Robinson because he was black,” Mardian said.

“We had heard that (USC head coach) Howard Jones would never have a Negro on his football teams,” Bartlett added.

We could write all day about USC, such as their mascot horse, Traveler, being named after American civil war Confederate general Robert E. Lee’s horse, or that their song “Conquest” is taken from a movie (“Captain From Castille”) about conquistador Hernando Cortez’s conquest of Mexico.

Basically it is a movie about the “heroic” white Spanish army slicing and dicing a bunch of poor “barbaric” indigenous Aztecs.  In fact, the racism is so overt, the book that the movie was taken from has a warning about racist themes, descriptions, and words used in the story.

Heck, if we want to go back far enough, we could bring up former USC President Joseph Widney, whom according to the Daily Trojan, wrote “Race Life of the Aryan Peoples, a book analyzing the superiority of Caucasians.” He also evidently “placed Los Angeles (home of USC)…as the world epicenter of Aryan supremacy.” This is not just some wacky professor with tenure, but the man that ran the ENTIRE university.

To add insult to injury regarding President Widney, the USC Office of Black Alumni Programs and the Black Alumni Association are located in a building on the USC campus named Widney Alumni House. We could find no mention of whom this building was named after. To be fair, Joseph Widney had a brother, Robert Widney, that was also very involved in USC at the time so it could have been either (although a president is much more likely to have a building named after him, than the brother of a president).  While the USC website goes into great detail about how most of their buildings were named, and seems to take great pride in it, it curiously neglects how the Widney building got its name. Hmmm. Regardless, the idea that these particular offices are located in a building with that name is beyond our comprehension. Insensitivity? Incompetence? Or a long ago childish joke on the USC African-American community? Who knows.

Yes, we could write all day about the hypocrisy of USC, but we would rather write about UCLA.

First, we don’t believe there is a university in America that compares with UCLA in terms of integration and breaking racial barriers. Bruins can be proud that UCLA is the school that: 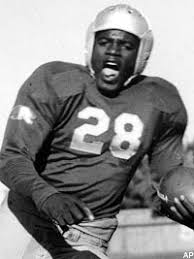 In athletics, UCLA has a proud tradition of including other groups as well such as women (Bruin basketball player Ann Meyers was the first woman in the nation to be offered a full athletic scholarship), Latinos (Dan Guerrero is one of only four Latino athletic directors in the nation) Asians (in 1939, UCLA football had three Chinese-Americans on the team, including quarterback Francis Wei who received a Congressional Medal of Honor, and gave his life in World War II. Wei was one of the very first Asian-Americans to play D-1 football), and Jewish (in 1936 UCLA basketball player, Sam Balter, participated in the 1936 Berlin Olympics, and in 1946 Alan Hoisch was the star running back on the undefeated UCLA football team). As you can see, this list goes on and on. It is not coincidence that the pioneers who broke the color barrier in professional football, basketball, baseball, tennis and several other sports all chose to attend UCLA.

To continue the theme,  UCLA has one of the preeminent Asian-Pacific Islander studies program in the country, and Bruin Manu Tuiasosopo was the first consensus collegiate All-American of Polynesian decent.  Today, Polynesians are frequently recruited by colleges all over the country, and it started at UCLA.

So the bottom line is if the USC coaches want to play this game in recruiting, they need to beware.   UCLA not only stands tall with ANY university in the nation on these issues, but it outshines USC by a mile.

Are we saying UCLA is perfect? No, not at all, but if history is a strong predictor of the future (and we believe that it is), then the future of UCLA is in good shape. And for USC’s future? We recommend that you read this 2013 article straight from the horse’s mouth, the Daily Trojan and make up your own mind.

UPDATE: A friend pointed out that a poster, DocJock, on BruinGold.com (great FREE site by the way), wrote that USC actually had an African-American player before C.R. Roberts by the name of “Addison Hawthorne.” We did a little research and found THIS TIDBIT about a Trojan African-American player named Addison Hawthorne from a 1950’s magazine. It is E-N-L-I-G-H-T-E-N-I-N-G to say the least. We recommend everyone CLICK HERE and take a look. Thanks DocJock!

Next, How To Out-Recruit USC Part IV.

NOTE: We have seen portions of this article appearing on message boards.  While we believe this is great information to be distributed, we would appreciate getting the recognition for the hard work it took to put it together. Links back to our site would be awesome. Thanks!

13 Responses to “HOW TO OUT-RECRUIT USC PART III”